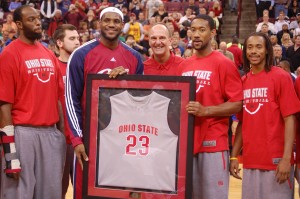 Over the weekend, No.2 Ohio State took on No.12 Miami University. LeBron James asked Ohio State University for a full police to attend the game at the Horseshoe but was denied. The Buckeye beat the Hurricanes, 36-24, but LeBron never showed up. The Ohio native was only granted one police escort, and LeBron responded by not showing up for the game at all. No word if King James was planning on wearing Buckeyes or Hurricane gear…. 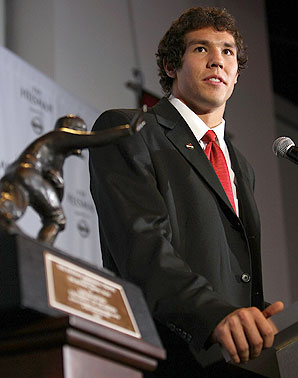 Vaneisha Robinson an amateur boxer, bought a LeBron James pendant for $5.00 at a garage sale. Impressed by her bargain shopping, Robinson decided to have the pendant apprised where she discovered it was worth $10,000.

In the midst of LeBron’s “decision,” Robinson decided to capitalize and sell the pendant on E-Bay. Robinson was contacted by Maverick O. Carter, who is a high school friend of James and CEO of LeBron James marking company LRMR. Carter claimed the pendant was his, and it was stolen. Carter or “Maverick” invited Robinson to his home where he said him and LeBron James would like to negotiate to buy back the pendant.

When Robinson arrived at Carter’s home, neither James or Carter were there. Instead, Carter’s mom and a bunch of neighborhood “thugs” greeted Robinson by blocking in her truck in the driveway and threatening to give back the pendant. Police are now investigating, and Robinson said she was fearful for her life.