Posted on January 7, 2011 by thejerseychaser

Jersey chaser and sports reporter Sara Carbonero is banned from talking about Real Madrid star Cristiano Ronaldo. You may remember Carbonero when she stole World Cup headlines when her boyfriend and Spain goalkeeper captain Iker Casillas kissed her after he won the World Cup.

Back in September, on a Spanish talk show, Carbonero again stole the spotlight when she criticized Ronaldo saying, “Ronaldo has always been like that, selfish and an individualist on the pitch and Real Madrid signed him like that…”

The remarks angered Ronaldo and caused tension between him and Casillas. Casillas has publicly defended his girlfriend saying her remarks were misinterpreted. But the rift is apparently so bad between the teammates that Carbonero is now banned from talking about Ronaldo until the storm is weathered. #TeamCarbonero

This past summer, Cristiano Ronaldo shocked the world when he announced he had a baby, just days after Portugal was knocked out of the World Cup. Details were not released about the child or who the mother was.

Now, the British tabloid The Mirror is reporting that the mother of Ronaldo’s only child is a 20-year old woman with whom he had a one night stand with. Ronaldo paid the woman $10 million to sign over her rights to the child. The baby, who is named Cristiano Ronaldo Jr., is being raised with the help of Ronaldo’s mother and sister, but now the baby mama wants her son back!

The woman is pleading with Ronaldo to let her see Baby Cristiano, but the soccer star refuses. According to The Mirror, Ronaldo will only let the woman see her son if she pays some of the money back he gave her in their settlement.

The mother, who is a British student, is said to be so upset and depressed that she dropped out of school. In the contract, the mother is not allowed to tell anyone she is the mother, not even her family, ““She feels like she has sold her soul. She has this millionaire lifestyle, but can never tell her friends and family the truth about what has happened – and that makes her incredibly lonely.”

If anyone knows any 20-year old British women who magically stumbled upon $10 million, it may just be Ronaldo’s baby mama.

Share It
Posted in Celebrity News | Tagged Cristiano Ronaldo | Comments Off
Posted on August 4, 2010 by thejerseychaser

Kim Kardashian back with Cristiano Ronaldo?

Perezhilton.com is reporting that Kim Kardashian is back together with Cristiano Ronaldo. Kardashian has been dating Dallas Cowboys Miles Austin, and new baby daddy Ronaldo was rumored to be engaged to model Irina Shayk. 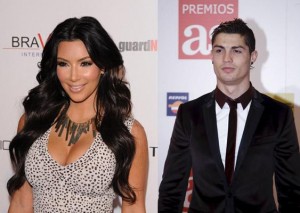 The two were linked together back in April and allegedly hooked back up at the Beverly Hills Hotel Tuesday night. This report comes just days after Kardashian cheered Austin on at practice. At least Kardashian is keeping it within “futbol”…. but thejerseychaser.com is team Austin!

Jersey to chase: Today’s hottie needs no introduction. Portugal’s Cristiano Ronaldo’s abs might be more famous than his soccer skills. Hot, talented, and rich, Ronaldo plays for Real Madrid after being transferred from Manchester United for $94 million! Alas, the captain of the Portuguese national team and fashion designer does not have it all, as his team was eliminated from the World Cup. After Portugal was ousted by Spain, Ronaldo was said to be visibly upset… looks like he may need some cheering up.

Recap: In the Battle Royale, Spain and Portugal fought a hard intense battle that remained scoreless until the 63 minute when Spain’s David Villa took a heel pass from Xavi Hernandez. Villa ties Slovakia’s Robert Vittek and Argentina’s Gonzalo Higuain with the most goals for the tournament (4). It was the first goal Portugal allowed in the World Cup. Spain making it into the quarterfinals makes three European teams, however that is the lowest in World Cup history. If you forgot that another game was played today, don’t worry so did we. The Paraguay Japan matchup was also very close and came down to penalty kicks. Paraguay got the edge scoring 5 penalty kicks to Japan’s 3.